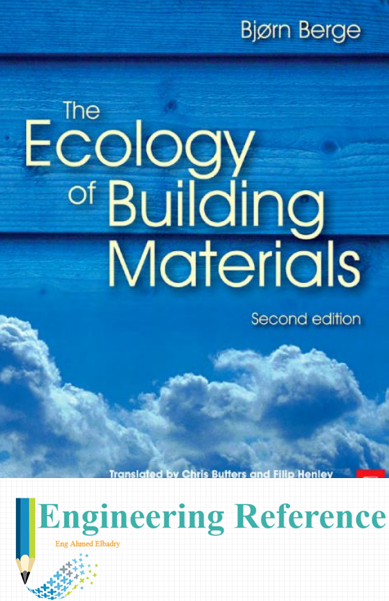 Foreword to the Second Edition
The Ecology of Building Materials was originally published in Norwegian in 1992, and the first English edition appeared in 2000. The book you have before you now represents a comprehensive revision; it has been updated in the light of new materials, knowledge and practical experience accumulated during the past decade. If the quantity of information produced during these years is anything to go by, environmental questions have never been higher on the international agenda.

The issue of climate change has played a central role, with successive and increasingly alarming reports from the International Panel on Climate Change (IPCC). Whilst keeping to the same basic structure, the book has been considerably expanded. In particular this applies to climate related issues. The wealth of information now available has also made it possible to raise the general level of precision in many areas. As with the previous edition, it is still the basic intention that this book shall serve as a reference book, rather than being read from cover to cover. Some overlapping and repetition has therefore been necessary.

Whilst Filip Henley translated the first edition, the translation of this edition has been undertaken by my colleague in Gaia Oslo, Chris Butters, whose knowledge and experience in the field of building ecology is exceptionally broad. He has also contributed with suggestions and additions that are integrated into the present text. My colleague Dag Roalkvam, also in Gaia Lista, has contributed similarly within the field of building physics where he is a recognised expert; and Rolf Jacobsen of Gaia Tjøme in the field of construction in straw and earth, one of his specialities.

I also wish to renew my thanks to others who have contributed to earlier editions of this work, including Frederica Miller, Howard Liddell, Varis Bokalders, Jørn Siljeholm, Hans Granum, Arne Næss, Karls Georg Høyer, Geir Flatabø, Per Richard Neeb, Odd Øvereng and Tom Heldal. In this new edition, illustrations have been substantially upgraded and have been provided from many sources; in particular I wish to thank Anne Sigrid Nordby, Alice Reite, Rolf Jacobsen, Sergio G. Fox, Bertil Harstrom, € Rod Ward Able, Dag Roalkvam, Camilla Høyem, Inga Lindstrøm and Anette Rosenberg.

I object! I do not agree that the Earth and everything that exists on her shall be defined by the law as man’s living environment. The Earth and all that is hers, is a special being which is older, larger and stronger than us. Let us therefore give her equal rights and write that down in the constitution and in all other laws that will come…

A new legal and moral status is needed where Nature herself can veto us through her own delegates… One must constitute the right of all things to be themselves; to be an equal with Nature, that is totally unarmed; do well out of it in a human way and only in accordance with their own nature. This means that one must never use a tree as a gallows, even if both its form and material fit the purpose excellently… What practical consequences should a law like this have? Before all economic considerations, this law would decide that nothing will be destroyed or severely damaged, all outstanding natural forms, landscape characteristics and naturally linked areas shall remain untouched.

No economic or leisure concern shall be developed at the cost of nature, or worsen the living conditions of man and other beings. Everything that man wants to do in the future, he must do at his own cost and with his own strength. As a result of this law we may return to old methods of production or discover new ones which do not violate the law. The manufacturing society will crumble and multiply, the meaningless superfluity of similar products on the world market will give way to the local market, independent of transcontinental connections.