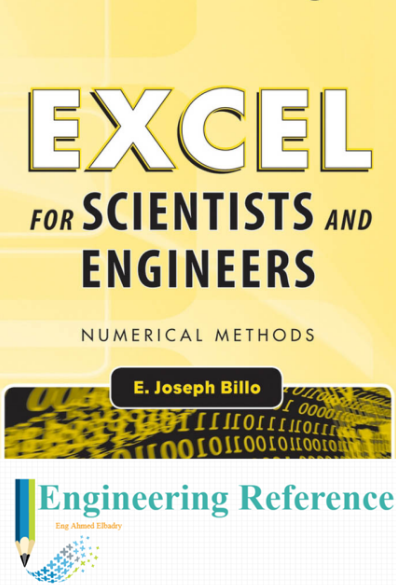 PREFACE:
The solutions to mathematical problems in science and engineering can be obtained by using either analytical or numerical methods. Analytical (or direct) methods involve the use of closed-form equations to obtain an exact solution, in a nonrepetitive fashion; obtaining the roots of a quadratic equation by application of the quadratic formula is an example of an analytical solution.
Numerical (or indirect) methods involve the use of an algorithm to obtain an approximate solution; results of a high level of accuracy can usually be obtained by applying the algorithm in a series of successive approximations. As the complexity of a scientific problem increases, it may no longer be possible to obtain an exact mathematical expression as a solution to the problem. Such problems can usually be solved by numerical methods.

A Note About Visual Basic Programming:

Visual Basic for Applications, or VBA, is a “dialect” of Microsoft’s Visual Basic programming language. VBA has keywords that allow the programmer to work with Excel’s workbooks, worksheets, cells, charts, etc. I expect that although many readers of this book will be proficient VBA programmers, others may not be familiar with VBA but would like to learn to program in VBA. The first two chapters of this book provide an introduction to VBA programming – not enough to become proficient, but enough to understand and perhaps modify the VBA code in this book.

For readers who have no familiarity with VBA, and who do not wish to learn it, do not despair. Much of the book (perhaps 50%) does not involve VBA. In addition, you can still use the VBA custom functions that have been provided. Appendix 1 provides a list of VBA keywords that are used in this book. The appendix provides a description of the keyword, its syntax, one or more examples of its use, and reference to related keywords. The information is similar to what can be found in Excel’s On-Line Help, but readers may find it helpful at those times when they are reading the book without simultaneous access to a PC.