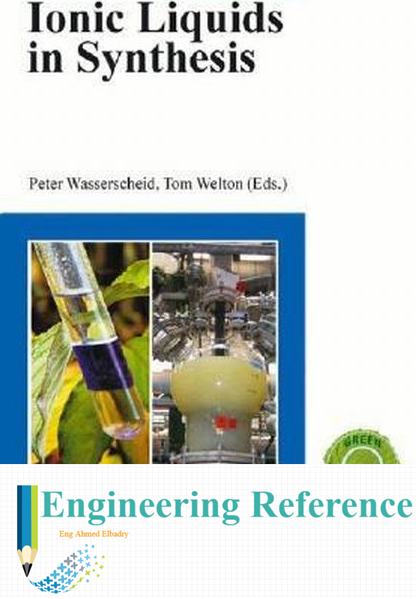 A book about ionic liquids? Over three hundred pages? Why? Who needs it? Why bother? These aren’t simply rhetorical questions, but important ones of a nature that must be addressed whenever considering the publication of any new book. In the case of this one, as two other books about ionic liquids will appear in 2002, the additional question of differentiation arises – how is this distinctive from the other two? All are multi-author works, and some of the authors have contributed to all three books. Taking the last question first, the answer is straightforward but important. The other two volumes are conference proceedings (one of a NATO Advanced Research Workshop, the other of an ACS Symposium) presenting cutting-edge snapshots of the state-of-the-art for experts; this book is structured. Peter Wasserscheid and Tom Welton have planned an integrated approach to ionic liquids; it is detailed and comprehensive. This is a book designed to take the reader from little or no knowledge of ionic liquids to an understanding reflecting our best current knowledge. It is a teaching volume, admirable for use in undergraduate and postgraduate courses, or for private learning. But it is not a dry didactic text – it is a user’s manual! Having established a historical context (with an excellent chapter by one of the fathers of ionic liquids), the volume describes the synthesis and purification of ionic liquids (the latter being crucially important), and the nature of ionic liquids and their physical properties

Central to this tome (both literally and metaphorically) is the use of ionic liquids for organic synthesis, and especially green organic synthesis, and this chapter is (appropriately) the largest, and the raison d’être for the work. The book concludes with much shorter chapters on the synthesis of inorganic materials and polymers, the study of enzyme reactions, and an overview and prospect for the area. This plan logically and completely covers the whole of our current knowledge of ionic liquids, in a manner designed to enable the tyro reader to feel confident in using them, and the expert to add to their understanding. This is the first book to attempt this task, and it is remarkably successful for two reasons. Firstly, the volume has been strongly and wisely directed, and is unified despite being a multiauthor work. Secondly, the choice of authors was inspired; each one writes with authority and clarity within a strong framework. So, yes, this book is more than justified, it is a crucial and timely addition to the literature. Moreover, it is written and edited by the key people in the field. Are ionic liquids really green? A weakly argued letter from Albrecht Salzer in Chemical and Engineering News (2002, 80 [April 29], 4-6) has raised this nevertheless valid question. Robin Rogers gave a tactful, and lucid, response, and I quote directly from this: “Salzer has not fully realized the magnitude of the number of potential ionic liquid solvents.

I am sure, for example, that we can design a very toxic ionic liquid solvent. However, by letting the principles of green chemistry drive this research field, we can ensure that the ionic liquids and ionic liquid processes developed are in fact green. [. . .] The expectation that real benefits in technology will arise from ionic liquid research and the development of new processes is high, but there is a need for further work to demonstrate the credibility of ionic liquid-based processes as viable green technology. In particular, comprehensive toxicity studies, physical and chemical property collation and dissemination, and realistic comparisons to traditional systems are needed. It is clear that while the new chemistry being developed in ionic liquids is exciting, many are losing sight of the green goals and falling back on old habits in synthetic chemistry. Whereas it is true that incremental improvement is good, it is hoped that by focusing on a green agenda, new technologies can be developed that truly are not only better technologically, but are cleaner, cheaper, and safer as well.”