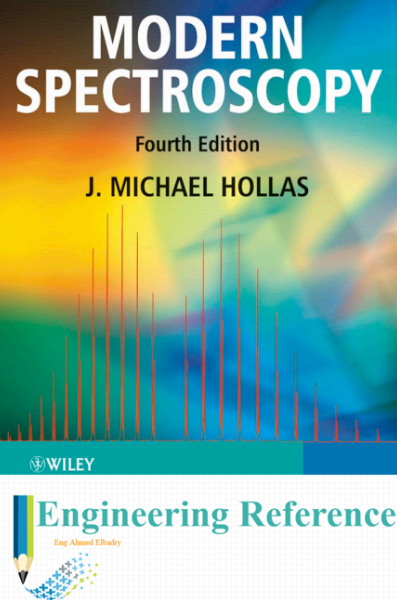 Modern Spectroscopy has been written to fulfil a need for an up-to-date text on spectroscopy. It is aimed primarily at a typical undergraduate audience in chemistry, chemical physics, or physics in the United Kingdom and at undergraduate and graduate student audiences elsewhere. Spectroscopy covers a very wide area which has been widened further since the mid1960s by the development of lasers and such techniques as photoelectron spectroscopy and other closely related spectroscopies. The importance of spectroscopy in the physical and chemical processes going on in planets, stars, comets and the interstellar medium has continued to grow as a result of the use of satellites and the building of radiotelescopes for the microwave and millimetre wave regions. In planning a book of this type I encountered three major problems.

The first is that of covering the analytical as well as the more fundamental aspects of the subject. The importance of the applications of spectroscopy to analytical chemistry cannot be overstated, but the use of many of the available techniques does not necessarily require a detailed understanding of the processes involved. I have tried to refer to experimental methods and analytical applications where relevant. The second problem relates to the inclusion, or otherwise, of molecular symmetry arguments.

There is no avoiding the fact that an understanding of molecular symmetry presents a hurdle (although I think it is a low one) which must be surmounted if selection rules in vibrational and electronic spectroscopy of polyatomic molecules are to be understood. This book surmounts the hurdle in Chapter 4, which is devoted to molecular symmetry but which treats the subject in a non-mathematical way. For those lecturers and students who wish to leave out this chapter much of the subsequent material can be understood but, in some areas, in a less satisfying way.

The third problem also concerns the choice of whether to leave out certain material. In a book of this size it is not possible to cover all branches of spectroscopy. Such decisions are difficult ones but I have chosen not to include spin resonance spectroscopy (NMR and ESR), nuclear quadrupole resonance spectroscopy (NQR), and Mo¨ssbauer spectroscopy. The exclusion of these areas, which have been well covered in other texts, has been caused, I suppose, by the inclusion, in Chapter 8, of photoelectron spectroscopy (ultraviolet and Xray), Auger electron spectroscopy, and extended X-ray absorption fine structure, including applications to studies of solid surfaces, and, in Chapter 9, the theory and some examples of lasers and some of their uses in spectroscopy. Most of the material in these two chapters will not be found in comparable texts but is of very great importance in spectroscopy today.