Download The Handbook Of Redox Biochemistry by Ian N. Acworth and D.Phil Oxon  easily in PDF format for free. 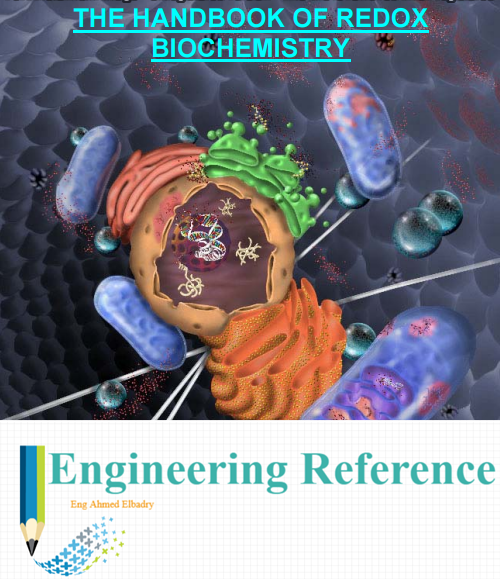 Mention a pure science such as chemistry or biology and most people will have a fair idea about the subject matter. Unfortunately, for those interested in studying the effects of reactive species on living organisms, no succinct and accurate descriptor of this field exists. Several general titles have been used over the years including free radical biology, redox chemistry and redox biology, yet none of them do justice to this complex, multi-disciplined field.
While free radical biology ignores the fact that many chemical species being studied are not free radicals, redox chemistry implies a disregard for any biological aspects. Oxidative metabolism has been used but this is usually associated with energy metabolism. Although still not perfect I prefer the term Redox Biochemistry. I will discuss free radicals and redox reactions in greater detail below. Oxygen is toxic to aerobic (and anaerobic) organisms, yet paradoxically oxygen is essential for their survival.

Today terrestrial aerobes (both animals and plants) have successfully adapted to live in an atmosphere composed of approximately 21% oxygen and can survive minor fluctuations in the level of respired oxygen without disastrous consequences. True anaerobes, on the other hand, tolerate oxygen poorly, and some cannot survive even a brief exposure to atmospheric oxygen (Table 1.1). Anaerobes were the first living organisms on the planet. These evolutionary simple organisms show a wide range of oxygen tolerance.

Strict or obligate anaerobes will only grow if oxygen is absent. While some obligate anaerobes are killed almost immediately following exposure to oxygen (aerophobic) (e.g., Clostridia species) others can survive for many days but cannot reproduce (e.g., Bacteroides fragilis). Another group of organisms, microaerophiles actually require some oxygen for growth but cannot survive when exposed to atmospheric oxygen concentrations.

Most bacteria that reduce nitrate (producing nitrite, nitrous oxide or nitrogen) are called facultative anaerobes as they are not affected by exposure to oxygen and in fact will preferentially use oxygen, rather than nitrate, during respiration. Anaerobes can be found in any environment where oxygen levels are decreased to less toxic levels including muds and other sediments; bogs and marshes; polluted waters; certain sewage-treatment systems; rotting material; deep underground areas such as oil pockets; the sources of springs.

Decaying teeth and gangrenous wounds; the colon; and inappropriately canned foods. Rather than using oxygen during respiration (they usually lack terminal cytochromes that transfer electrons to oxygen) they use other electron acceptors such as ferric ions, sulfate or carbon dioxide which become reduced to ferrous ions, hydrogen sulfide and methane, respectively, during the oxidation of NADH (reduced nicotinamide adenine dinucleotide is a major electron carrier in the oxidation of fuel molecules) (Figure 1.1).