Download Thermochemical Conversion of Biomass for The Production of Energy and Chemicals by Anthony Dufour easily in PDF format for free. 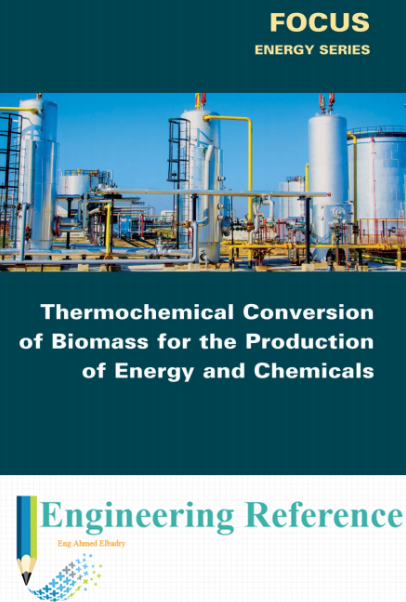 I warmly thank the PhD, post-doctoral and Master’s students I have (co-) supervised and who produced the majority of the results from our group presented in this book: L. Abdelouhaed, S. Cissé, X. Erdocia, J. François, T. Ghislain, L.Y. Jia, G. Lardier, Y. Le Brech, M. Nowakowska, R. Olcese, B. Ouartassi, M. Pander, C. Pelletier, L. Rodriguez, S. Rousseau, B. Shrestha and L. Tibavizco. I also thank all the technicians and engineers from our laboratory and all the other colleagues with whom I have collaborated.
I cannot mention everyone (more than 100 people) but be sure that I think of each of you when writing these lines. Last but not least, I thank my family: my wife and my son. I hope he will see a beautiful, “smokeless”, future. “Biomass” is defined by the International Agency of Energy (IEA) as: “any organic, i.e. decomposing, matter derived from plants or animals available on a renewable basis. Biomass includes wood and agricultural crops, herbaceous and woody energy crops, municipal organic wastes as well as manure” [IEA 12]. In this book.

We particularly focus on the “lignocellulosic” biomass, which is mainly wood or agricultural residue such as straw (Figure I.1). This type of biomass is today abundantly available on Earth and its valorization addresses important challenges for the development of sustainable energy and for mitigation of climatic changes. his type of biomass is mainly composed of carbon (C), hydrogen (H) and oxygen (O). These atoms are distributed in biomass in complex macromolecules mainly composed of carbohydrates (cellulose and hemicelluloses) and aromatic compounds (lignin).

Its chemical composition is described in detail in section 4.2. arbon flows between each reservoir in an exchange called the carbon cycle, which has slow and fast components (Figure I.2). Any change in the cycle that shifts carbon out of one reservoir puts more carbon in the other reservoirs. Changes that put carbon gases into the atmosphere result in warmer temperatures on Earth. There are slow and fast carbon cycles. Over the long term (a few hundred thousand years), the slow carbon cycle seems to maintain a balance that helps keep Earth’s temperature relatively stable.

The fast carbon cycle (time measured in a lifespan) is largely the exchange of carbon through life forms on Earth. During photosynthesis, plants absorb carbon dioxide (CO2) (120 + 3 gigatons of carbons/year (GtC/year)) to produce the biomass materials. This process is a part of the fast carbon cycle [RIE 11]. The emissions in the atmosphere due to the combustion of fossil carbon (9 GtC/year) affect the fast carbon cycle and result in an increase in the concentration of CO2 in the atmosphere leading to the global warming of Earth. Theoretically, the current  total consumption of fossil carbons (oil, coal and gas) would only represent the valorization of less than 10% carbon produced by biomass (10% of 120 GtC/year).

Therefore, biomass could be (theoretically) a sufficient source of carbon to meet our energy needs. Hereafter we will see that the potential of biomass is in fact lower due to technical and economical constraints. Wood has been the major source of fire for mankind for at least 600,000 years. In many parts of the developing world, more than 3 billion people still rely on biomass as the primary source of household energy [ANE 13]. Wood char has been produced for millennia for drawings (as in the cave of Grotte Chauvet, with drawings more than 38,000 years old), then for the manufacturing of bronze tools and as a cleaner alternative fuel than wood [ANA 03] (Figure I.4).